Click on this dramafever link to watch this show: Cheongdam-dong Alice

The main reason I wanted to see this drama was because of the main characters. And as with my previous post on Yellow Boots (Ice Adonis), there will be spoilers. I finished this show a while back, so I might not be as detailed in this as I was with my first post.  The story is centered on this girl (Se Kyung) who lives in the poorer areas of Korea. The first episode begins with her applying for a job in the fashion industry. It is hard for her to get a job because of her lack of experience outside of the country. Many of the other applicants have studied abroad. Since she is poor she cannot afford such an education. However, even without money, she is very smart and talented. Her boyfriend (In Chan) feels as though he is a burden to her and attempts multiple times to break-up with her because he wants her to succeed and be happy. Also in this episode I believe, there is a flashback of this woman (Yoon Joo) she used to go to school with. Yoon Joo was jealous of Se Kyung when they were in school and tried to get ahead by using people. Yoon Joo works at this this luxury brand store and she is married to the president of that company (Min Hyuk). Se Kyung applies to get a job in that same company and Yoon Joo makes it so that Se Kyung works there. Yoon Joo plans on making Se Kyung her personal assistant to do her errands for her and to buy her things. At this point, Se Kyung does not know who her boss is until later. She is surprised to find out when she does. 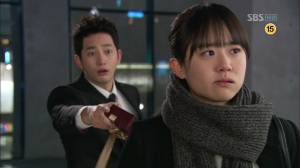 Now in the midst of all this, Se Kyung meets the CEO of Artemis (Jean Theirry Cha, also known as Seung Jo), which is another luxury brand company. He was Yoon Joo’s former husband (Min Hyuk has no knowledge of this). At the time of their meeting, Jean Theirry Cha tells her that he is the personal assistant of the CEO so she doesn’t know that he is the CEO until later in the show.

This is sounding complicated by now and there are more details that I probably don’t remember at this point. But that is pretty much the gist of the story. Pretty much these two girls, although rivals, have the same ultimate goal. They want to live and work in Cheongdam. Se Kyung eventually learns that it is impossible for her to enter Cheongdam without Yoon Joo’s help. Yoon Joo reluctantly helps her by giving her her journal with all the notes she compiled on how to get into Cheongdam. The show makes multiple references to Alice in Wonderland’s White Rabbit. As you know in the story Alice in Wonderland, the White Rabbit “leads” the curious Alice into wonderland. So, Yoon Joo proposes that Se Kyung find her own White Rabbit. She eventually decides to used Seung Jo as her White Rabbit, disregarding his feelings for her. It is here that you feel sorry for him. His previous relationship with Yoon Joo ended because she wanted to get ahead and staying with him would only hold her back. He was crush and devastated. You also see that Se Kyung is torn between her feelings for him and her ambition to enter Cheongdam.

Eventually as the show progresses, Seung Jo finds out that Se Kyung is just using him and he decides to disappear. But Se Kyung finds him at the airport and convinces him to stay in Korea. The last few episodes follow Seung Jo and Se Kyung’s relationship. It is unclear if they actually end up together at the end but I think they do. Both of them had been through tough times and Seung Jo has to learn to trust Se Kyung again. But ultimately, I think they do end up together.

The theme of Alice in Wonderland is scattered throughout the show and it is not only the mention of the White Rabbit that connects the show to the children’s story. In the original story, Alice disregards her studies and prefers to live in the dream. In the drama, Cheongdam is the fantasy for Se Kyung. It is where she dreams to be. Living in a poor home, she strives to reach her dream only to realize that getting there doesn’t mean ultimate happiness. She faced heart ache and hardships instead. This is the same in the original story. Alice wanted to go home at the end of the story. She no longer wanted to live in this fantasy she yearned for at the beginning.