Very wholesome movie. I have to admit, I wasn’t expecting to love this movie. You would think that this is catered only for kids…but you would be wrong about that because there are lessons we can all learn from this film. It may seem like a simple movie about a bear but it reminds those of us who have forgotten that you can find solace in the most unexpected places. You can find a family in the company of strangers and being different is never a bad thing. This is a movie about the acceptance of the differences in everyone.

This movie starts with old footage from an expedition set out by an explorer named Montgomery Clyde. He discovered a few bears living in a place called “Darkest Peru.” He immediately notices that they are intelligent. He stays with them and teaches them how to speak and introduces them to marmalade. Before he leaves he tells them that they will always be welcome in Britain. He also leaves a souvenir…a red hat. Years later, you see Paddington with his family enjoying their life in the forest. They make marmalade and are having a great day until something terrible happens. An earthquake shakes their entire world and nothing will ever be the same again. 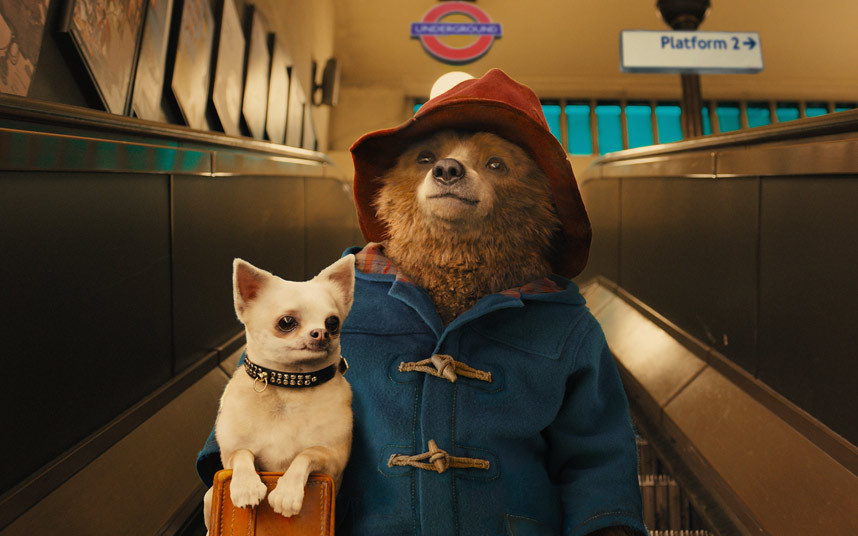 Paddington then goes on a journey to Britain to find a new home. He’s scared and I would be too if I was going to a strange place on my own. He eventually finds a home with a family, the Browns, who don’t accept him at first. Mrs. Brown finds it in her heart to let him in and it just takes the rest of the family a little while to warm up to him. And of course, a movie wouldn’t be complete without some trouble of some sort. It turns out that Montgomery Clyde had a daughter, Millicent. In the past, when he had returned from his expedition, he refused to bring back a specimen from Darkest Peru (the bears). So he was humiliated and rejected by his fellow peers. This hit a nerve in Millicent. She was so jealous and bitter that her father’s work was never recognized that she vowed to make it happen. She spent years tracking down the bears from Darkest Peru and when she finally found Paddington, she thought that her chance had come. Her plan was to find him, stuff him and put him on display in the National History Museum.

So, everything eventually ended well for Paddington. Millicent got to do community service at a petting zoo as punishment for what she had done. And Paddington got to stay with his new family. This movie has made a special place in my heart. If you guys know me, you know that I’m more into superheroes and scary movies. This film took me by surprise. I really loved it and I know that you will too. I found myself feeling for Paddington. They way the story is told makes you want good things to happen to him. Even I wanted to adopt Paddington into my family is the Browns didn’t want him. Even if you don’t like movies with animals as the main character, just give this a try. You won’t be disappointed.

Let me know your thoughts.