What can I say about this movie? Is it enough to say that it was great? I think the word great is too simple a word to describe how this movie made me feel. Fair warning, though, this movie did make me sick to my stomach at some parts because of the camera movements. But then again, I’m pretty sensitive with that stuff and others might not be. Nevertheless, I could not keep my eyes off the screen because it was just that good. There are so many factors that made this movie amazing. This movie put me on my toes, had me chuckle at some parts and brought me to tears in others. It was very loosely based on a true story of the hijacking of Captain Richard Phillips’ ship at sea. There is a controversy whether this was actually based on true events. Many of the original crew have a different story. But, true or not, I really enjoyed the movie. 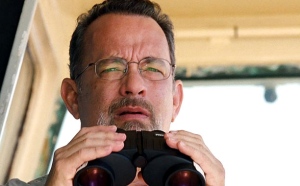 The acting was phenomenal, mostly on the part of Captain Phillips who was played by Tom Hanks. He did an exceptional job. I think that his acting was pretty realistic given the circumstances the character had to face. And there were plenty of interesting scenes even though many of them were either in the ship or the lifeboat. 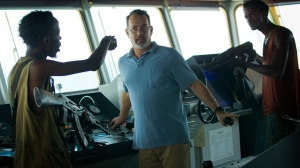 The story grabbed my attention from the start and I sensed the fear they felt when they saw those two boats speeding towards their ship. It must have been terrifying to have to do this for a living. I’m trying not to mention too much in this review because I don’t want to give out any spoilers. I have in my other reviews but I’m going to let it be on this one. I really recommend this movie. You won’t be disappointed (unless you’re one of the original members of the crew, that is). If you’ve seen it, comment below on your thoughts 🙂 Also, what are your thoughts on movies completely changing what is true? Do you think that it’s good business or wrong?