I would first like to, if I actually could, give a standing ovation for this movie. Come to think of it, I did hear clapping during the end credits at the theater today. I don’t even know where to begin because my head is swimming with thoughts of how awesome this movie is. The movie is both funny, exciting, thrilling and heartwarming. And yes, I actually said the word heartwarming to describe a Marvel action movie. So let’s start with who directed this movie and the basics before we get to the meat of this review/discussion. Oh and also, if there are any spoilers, I will warn you beforehand but there probably won’t be because I don’t want to ruin it for anyone. The Iron Man series is, of course, by Marvel. Iron Man and Iron Man 2 were both directed by Jon Favreau and Iron Man 3 was directed by Shane Black. Iron Man 3 was produced by Kevin Feige and written by Drew Pearce and Shane Black.

The movie starts off with Tony Stark talking. It’s a voice-over and he is telling a story of what had happened a few years before the beginning of first Iron Man  movie. He had hinted at this memory being the beginning of something big. So it was the year 1999 and it was a New Years Eve party. Stark was walking arm in arm with a “botanist”, as Stark calls her. She went by the name of Maya Hansen. Also in the beginning of the movie you see a scientist named Aldrich Killian who so desperately wanted Stark to notice him. He was unkempt and had an odd way about him that, I guess, would be off putting to some people. He told Stark about his company, Advanced Idea Mechanics (AIM) and how he wanted Stark to be a part of it and to support it. But as you know, being Tony Stark, Killian is ignored and pushed aside. I had looked up what was the matter with Killian because I had known that he had physical disabilities but they didn’t mention what they were in the film and weren’t even clear about them. Killian was the kind of person who couldn’t accept his shortcomings and he wanted to fix them with science. So, he created Advanced Idea Mechanics. After the flashback ends, the present day story begins. In the present, there is this mysterious man called The Mandarin who is terrorizing the American people. There have been a series of attacks linked to The Mandarin and it is up to Stark to stop him from killing more innocent people.

I can honestly say that this Iron Man movie is the best out of the three. Iron Man was great when it came out. After that movie I was definitely hungry for more. I can never get enough of Marvel movies, especially Iron Man. I fell in love with the character for a couple of reasons, one being, he is an engineer who is also a super hero. I love main characters who are smart and figure things out on their own when given only the bare minimum. He had built a device to save his own life in a cave while imprisoned. Now, if that’s not what you call a genius, then I don’t know who is. Another reason is the fact that he is funny and also, he is played by Robert Downey Jr. I’ve always been a Downey fan! The story in Iron Man 3 also has much more depth and feeling than the other two. Not that I didn’t appreciate all the action that was packed into 1 and 2, but I was moved by some of the scenes in Iron Man 3. The relationship between Tony Stark and Pepper Potts was never really shown as serious or meaningful in any way. I guess you could assume that it was, but you do not really see it. In Iron Man 3, you can see how Tony Stark loves her and how much he needs her. I actually felt like crying a little. Also in the movie you get to see how much Stark has grown from an egotistical jerk into someone who cares about other people around him. He reminds me of Superman, the way he wants to save everyone and protect those he loves. Superman had always been the perfect superhero in my mind and I can see Stark becoming that and possibly better. Even though he is still impulsive and, at times, doesn’t think about the consequences of his actions, he learns. And with those lessons he has become better as a human being. It might not have seemed so at first, during the first Iron Man movie, but Pepper plays an integral part in Stark’s evolvement into a better person.

Yeah, yeah, I know. I’m being too sappy aren’t I? Where’s the action-talk? What about the action? Well, the action was amazing, as expected. Iron Man 3 doesn’t fail to impress. The fight scenes were very well choreographed. The visuals and the special effects were all top notch. But what is a great movie without the story? Fortunately, Iron Man 3 has both. Oh and I almost forgot to mention this one little fact about the movie. I liked how they refer back to The Avengers and what had happened there. I was watching an interview with Robert Downey Jr. and he stated that he requested that they include this in the movie. It makes everything seem more put together. Instead of pretending that the events that took place in The Avengers didn’t happen, it was nice to see that come into play in this movie.

The acting was wonderful. I can never say anything bad about Robert Downey Jr.’s performance. Gwyneth Paltrow was also great in the movie, as she always is. I have nothing bad to say about the acting. Even the minor characters did an amazing job with their roles. I believe that Paltrow had more to do with this role than the other two movies because it was a lot more emotional and more involved. I applaud her performance and I can’t wait to see more from her if she does more Marvel movies. Guy Pearce and Ben Kingsley did outstanding jobs for their roles as well.

Also, we must not forget about the humor that is always sprinkled throughout the Iron Man films. Even with all the destruction and death happening around them, the characters always happen to make the situation light and poke fun at something. The story is written very well and the light moments are placed perfectly. Nothing is out of place in this film. There are no awkward moments. Pearce and Black did a great job with the screenplay.

The music was composed by Brian Tyler and fit the movie very well. Tyler had also composed music for popular movies including The Expendables, The Expendables 2, Fast Five, Fast and Furious, Rambo and Eagle Eye. He has also composed music for video games like Lego Universe, Call of Duty: Modern Warfare 3 and Far Cry 3.  He is a great composer and am looking forward to seeing what pieces he will be composing in the future.

Now I’m not sure if there is going to be another Iron Man title coming out but I got the feeling that this was the end of the Iron Man Trilogy. But there is always hope for more movies. I would love to see more. However, there is always the Avengers. If they stopped making movies with Iron Man and Pepper Potts in them, I don’t know what I would do. I would probably just cry (haha). A little too overdramatic, but I do love both of those characters. So, what is the final verdict on this film? You guys already know the answer to that question. I recommend it to everyone, especially Iron Man fans and Marvel fans in general. This film has motivated me to make another Iron Man doll. Probably the Iron Patriot. What do you guys think? If you guys have not seen my original Iron Man doll, click on the image below. And as always with superhero movies, stay till the end (all the way to the end). There is a scene you’ll be interested in seeing 🙂 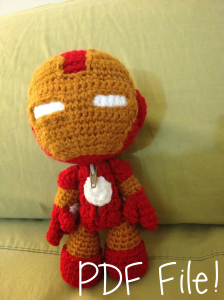